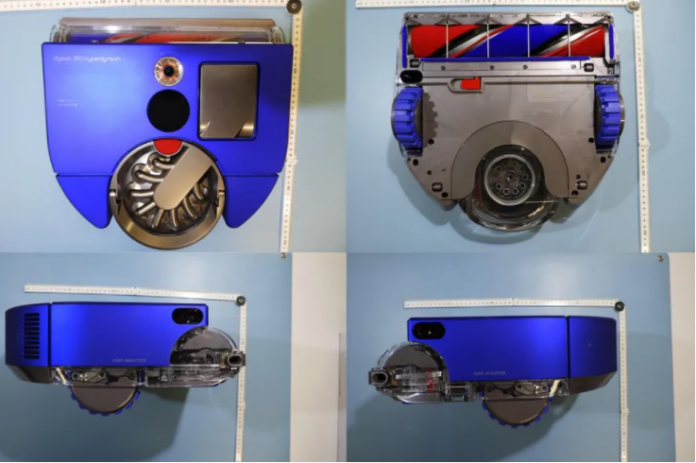 Dyson’s last vacuum cleaner, the oddly-named 360 Heurist, skipped a US release, apparently because its design was ill-suited to the layout of American homes. But it looks like the company is planning to launch a new robovac in the US soon, after filing details of an unannounced product with the FCC. Photos in the filing seem to show a new design that is wider and flatter than its predecessors, with a squared-off rear and bulkier charging base.

The unnamed robovac comes in the same striking nickel blue color as its predecessor, and has tank treads and a detachable dust bin, just like Dyson’s previous forays into this product category. It also looks like the device (labelled RB03) has the Heurist’s 360-degree camera with LED lighting ring. Those LEDs are important, as they ensure the device can navigate in the dark — handy if you want your robovac to clean when you’re out or asleep.

Branding on the device suggests it will also use Dyson’s new Hyperdymium motors. This is simply Dyson’s name for its latest brushless electric motors, which have appeared in its most recent stick vacuums. It also looks like you can remove part of the internal tubing (picture 4 below) that connects the bin to the brushes. That would be a neat upgrade, as the 360 Heurist had a tendency to clog when vacuuming piles of large debris.

The most interesting change for this product, though, is the new shape. Dyson’s previous vacuums, the 360 Eye and 360 Heurist, have been taller and narrower than rival products built by iRobot and the like. This allows them tighter cornering around items like chair legs, but stops them from vacuuming under some furniture. It’s hard to gauge the exact dimensions of this new product (despite the inclusion of rulers in pictures, the perspective is confusing), but it does seem to be wider and flatter than the Eye and Heurist. This would tally with Dyson’s past comments that the Heurist was not quite right for US homes. Allowing the vacuum to get under more items of furniture would certainly help with sales.

There’s no guarantee of course that this product will end up in the US, but an FCC filing does obviously suggest that this is Dyson’s current ambition. We expect to hear more about this product in the future.

How to take screenshots on your Android phone